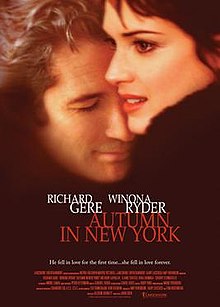 Last week we looked at living wills and their effects on estate planning for incapacity as demonstrated in the movie The Descendants. But a living will by itself is usually poor planning. No matter how elegantly drafted, it is impossible to use a living will to address every particular medical decision that may arise prospectively.  So to ensure that medical decisions can be made for someone who is incapacitated in those areas where a living will is silent, estate planning attorneys advise that clients also execute health care powers of attorney, sometimes called health care proxies.

Now I’d pick George Clooney for a leading role almost every day, but occasionally you need to cast a suave lawyer or successful business executive for a 90s romantic comedy, so you go with Richard Gere.  In Autumn in New York he plays Will, the boyfriend (in an all-too serious, not very good but hang with me for the sake of this illustration romantic drama) to Winona Ryder’s character, Charlotte. Charlotte has a life-threatening condition, and at the beginning of the movie she has a living will that instructs that no heroic measures are to be taken to save her life if she becomes incapacitated. But later (after falling in love with Will) she decides that she wants the doctors to do whatever Will wants. She signs a legal document, and a few scenes later Will is the person that speaks with her doctor when she is unable to speak for herself.

We’ll conclude this short series on estate planning for health care during incapacity with a post next week on organ donation and advance medical directives.  Stay tuned.